Create an Account - Increase your productivity, customize your experience, and engage in information you care about.

Early Homesteaders first came to the area that would eventually be known as Oakley in the 1870s, prior to most of the settling of the Plains that took place around the mid 1880s. The majority of these homesteaders in Northwestern Kansas arrived by taking a trip along the Smoky Hill Trail.

In 1884, Judge Fredman and David D. Hoag officially founded Oakley. The settlement's original name was Carlyle, which was soon changed to Cleveland. Given the fact that there was already a nearby settlement named Cleveland, in 1885 Oakley received its official and life-long name. Founder David D. Hoag, affectionately named the township after his mother, Elizabeth Oakley Gardner Hoag.

One of the first businesses that was established in the Oakley area was the State Bank of Oakley, in 1886. Soon after, in 1890, the first school district was organized for Logan County.

After a devastating fire in 1904, which burned all the wooden businesses in town, new brick and concrete buildings were established. Many of these building are still in use today and can be seen while strolling through town. 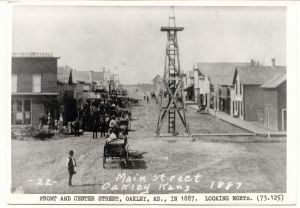